According to the science journalist, Robert Alder, blood circulation is a trivial concept in the modern world (Pickover 90). Adults and children alike all understand that blood is pumped throughout the body by the heart in order to supply the tissues with oxygen. Some would be shocked to discover that up until the 17th century, a scientific understanding of blood’s path through the body did not exist. William Harvey, an English Chief physician at St. Bartholomew’s hospital in London, used dissected animals and human cadavers to fuel his research (Parker 83). Before his work, many ancient theories existed regarding blood. One of the most famous physicians, Galen, believed that digested food traveled to the liver, where it would be transformed into blood that was then pumped upwards into various locations in the body (Parker 82-83). Galen also claimed that there were two types of blood; blue blood and red blood. William Harvey proved that there were not two different types of blood, but rather, that the color of blood is dependent upon oxygen levels. Harvey would trace the route of blood on living animals by pinching or cutting various blood vessels near the heart in order to note the direction of flow (Pickover 90). He would also experiment on live humans by applying pressure to arms to observe how the veins would swell (pickover 90).

Harvey understood that there were two kinds of circulation: pulmonary (where blood travels from the heart to the lungs) and systemic (where blood travels from the heart to the rest of the body and back) (Parker 85). In his book, De Motu Cordis, or, On the Motion of the Heart and Blood in Animals, he first introduced these concepts of circulation and the recycling of blood (Parker 83). His 20 years of research explained that poorly oxygenated blue blood travels into the right atrium of the heart, where it is pumped into the lungs and re-oxygenated. Once this occurs, the red blood (oxygen rich) goes into the left side of the heart and is pumped throughout the body where it then repeats the route over and over again.

William Harvey knew that there must have been some sort of connectors between arteries and veins in order to help complete the circuit, but he did not have a microscope to prove anything. Years after his death, an Italian physician, Marcello Malpighi, used a microscope to prove the existence of capillaries. (Pickover 90). Harvey’s work was heavily criticized because it challenged the theories of ancient medical giants like Galen. Before the end of his lifetime though, William Harvey got to see his work become more universally accepted as opinions gradually shifted (Parker 85). William Harvey takes his place in history as the man who beat out Galen and made his ancient and well-respected theories obsolete. 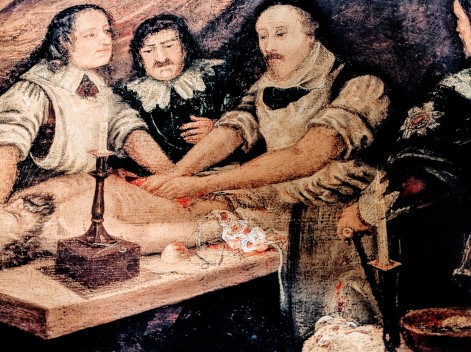 “The blood does pass through the lungs and the heart by the pulse of the ventricles, and is…sent into the whole body, and … returns from the little veins to the greater… form whence it comes… into the ear [atrium] of the heart”–William Harvey (Parker 85).

(If that didn’t make you grateful for modern medicine, then I don’t know what will!)